Strong pre-workout, with a unique Russian formula, that serves both as an energy booster and as a fat burner

Focus & Power will peak your energy levels, helping you to perform better, for longer periods of time, will boost strength, power and lean muscle mass.

Get Huge mental Focus on your workout

Focus & Power is specially designed to improve your reflexes and reaction time, while at the same time enhances your balance, speed, strength and endurance. If your sport is mixed martial arts, football, basketball, tennis or any other sport that needs eyes, ears and muscle coordination to a maximum level, this is what you need. It is not just another pre-workout that only increases vascularity and gives you energy while training. Focus and power will also give you huge mental focus that will help you accumulate all the power, and energy in your body and put them to work towards your goal, which is to become your best self. Moreover Focus &Power is a two-for-one supplement, because it is extremely fat burning. It uses your own fat to fuel your workouts!

The name says it all, focus on exactly what matters: RESULTS

Get a scoop 30 min before your workout-fight and start winning or breaking your personal record. For maximum results consume with relatively empty stomach.

* WARNING: The product is extremely strong. Take a half a dose during the first 2-3 times of use, to test your tolerance  and to get used to the product.

Ginseng – is used for improving thinking, concentration, memory and work efficiency. It is widely used as a tonic, for improving physical stamina, athletic endurance and well-being in general.

Guarana- is used to enhance athletic performance and to reduce fatigue. It has been used in the past as an aphrodisiac and a mood booster and there’s evidence that guarana – when used along with other supplements– may promote weight loss.

Caffeine - is a well-known stimulant of the central nervous system. Use of caffeine makes you more alert, gives you a boost of energy while at the same time enhances your body’s daily energy expenditure and significantly increases fat oxidation.

BCAA's, aka L-leucine,L-isoleucine and L-valine, are essential amino acids, well known for their anticatabolic (preventing muscle breakdown) and anabolic (muscle building) effects. They increase the rate of protein synthesis, they enhance energy and they aid in muscle tissue recovery after intense workout sessions.

Creatine results are beyond any doubt because you can actually see athletes that take creatine getting bigger and stronger. There's not much to add except for creatine will improve performance in weight lifting exercises, will increase energy and stamina levels, and speed up healing and recovery rates.

L-citrulline is a naturally occurring amino acid that is found in some foods like watermelons and is also produced naturally by the body. L-Citrulline is used as a sports performance supplement , because it reduces fatigue and improves endurance for both aerobic and anaerobic prolonged exercise and it is also used as a cardiovascular health supplement because it opens up veins and arteries, thus improves blood flow and reduces blood pressure.

Tyrosine- is a nonessential amino acid the body makes from another amino acid called phenylalanine. It is a building block for several important brain chemicals called neurotransmitters, including epinephrine, norepinephrine, and dopamine. Neurotransmitters help nerve cells communicate and influence mood. In our pre-workout tyrosine is used to enhance alertness and focus and has mood elevating properties

Taurine - is an amino acid that supports neurological development and helps regulate the level of water and mineral salts in blood. It is also thought to have antioxidant properties. Several studies suggest that taurine supplementation improves athletic performance, especially when combined with caffeine, it improves mental performance.

Improves your body’s Response to Stress, enhances Nervous System Health and also helps strengthen the body, making it more resilient to challenges, such as workout or other fatiguing tasks. 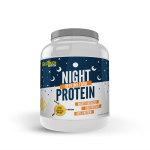